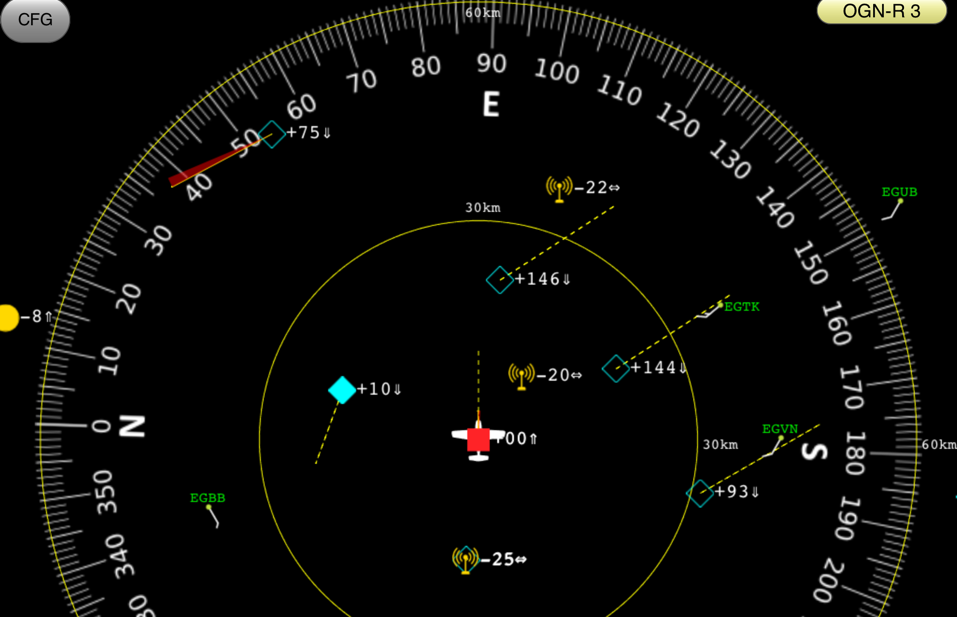 In this post we will look at the difference between strategic and tactical situational awareness and how using the PilotAware Radar Screen displayed on an iPad or Android device can possibly help.

Most importantly, visual contact with an approaching aircraft is the final stimulus that is required to take avoiding action, just as it would be with a bird strike with a flock of geese. No rules of the air between us and them. There is absolutely no substitute for looking out of the window.
‍

Flying and collision avoidance is not a video game.

Glider, hang glider and paraglider pilots really understand tactical situational awareness. 50 aircraft plus in a thermal all trying to out climb, out whit and outperform each other seems to be a recipe for disaster. However, air to air collisions of this kind are not common because of the huge respect for rules, training, experience, 20/20 vision and help from tactical EC such as Flarm. The Mk 1 eyeball, as visual acquisition is often referred to, works hard in this situation and there is little time to relax.

Flarm is designed to let the thermalling glider pilots know where the nearest threat is coming from but it is the pilot that decides what to do to mitigate the risk, taking into account the rules of the air, physics and decent behaviour. All this is done in the heat of the moment with the competition pilot making tactical decisions just as one would in a battle. Thankfully not all flying is this frenetic.

Strategic Situational Awareness involves flying with an awareness of one’s current position and of local aircraft but also looking forward to where the aircraft will be in 5, 10, 15 minutes or more. In the same way that a pilot flying defensively will need to know of upcoming controlled airspace and take appropriate action. The same goes for upcoming aircraft, that cannot be seen visually but will need to be considered as the flight progresses.

It is a well-known fact that a pilot cannot see a GA aircraft that is at the same height and which is further away than 4KM no matter how good their eyesight is. Even when the pilot knows where it is by various means such as ATC, audio contact or via electronic conspicuity. This is where strategic situational awareness helps. Knowing that there is traffic beyond the 4KM horizon gives a strategic view allowing the pilot to use a visual scan to concentrate on the tactical view.

Some users have commented that they prefer to have a dedicated traffic screen for Electronic Conspicuity instead of, or in addition to, having aircraft displayed on their chosen Electronic Flight Bag. This is usually because the clarity of a traffic display screen is preferred. This is a personal choice so PilotAware has provided solutions for both.

This is a typical PilotAware RADAR Display on an iPad.

The first thing to notice is the display of the number of ground stations that are in range. This is shown on the banner in the top right-hand corner. This will say OGN-R (N) or ATOM (N) depending on which software version you are using. In this screenshot the aircraft was in range of at least 3 ground stations. This is typical but will depend on your altitude and where you are flying in the country. There are 200 stations installed by the community in the UK and there will be 300 by the end of 2021 but coverage is not yet universal. You must also have enabled 'show groundstations' on the configuration page to show the ground station icons on the screen.
‍

You must be in range of at least 1 ATOM ground station to receive uploads of Flarm equipped aircraft Mode-S/3D and METAR information. The ATOM software prioritises aircraft locations rather than showing the number of stations in range. So this is currently not an accurate representation of the actual ground stations to which you are currently connected.  PilotAware is continuously working to increase the number of ground stations installed and the efficiency of the software.
‍

In this Radar representation, we have chosen to use TAS type symbols rather than aircraft ICONS but either style can be used.

The yellow lubber lines, extending from the aircraft symbol, show the direction and speed of the aircraft. This is accompanied by a white number which is the vertical separation from the host aircraft in 100’s of feet. So 144 is 14,400 ft. There is also an indicator which shows whether the target aircraft is going up, down or flying level.

As an example of using the PilotAware RADAR Screen for strategic planning, the following screenshot shows a collection of targets at 10.00 o-clock that was accompanied by the equivalent amount of voice alerts.  The voice alerts were configured to make the first announcement at 10KM’s. This is a strategic attention call, inviting a quick look at the screen in the visual scan.

This screen shows multiple gliders landing, or on the ground, at Shennington (Edgehill) gliding club. Other gliders are also on the approach returning from the day's competition task. This can be determined by the height, the short lubber lines (low speed) and the red turning circle of the thermalling glider at 5600 ft. The gliders positions were being rebroadcast by the ATOM station and being received by PilotAware Rosetta.

None of these aircraft was an immediate threat but the screen provides the pilot not only with a strategic warning to avoid the area but also to scan locally for returning gliders and club gliders that have no EC. The competition was obviously in the area NOTAM but the RADAR screen gives a real-time indication of the gliders returning home. The helpful ATC at Birmingham and Gloucester would have said something like multiple contacts at Shennington but the RADAR screen provides a much clearer picture.

Other strategic uses include noting the circuit patterns at arrival airports and the number of aircraft in the circuit and lining up. Very useful for when you are 20km away from those popular fly-ins at Sandown, and the BMAA, LAA and other rallies.

Seeing the majority of aircraft.

At PilotAware we believe that seeing the maximum number of aircraft types is most important. For example, when in range of an ATOM GRID station(s), PilotAware Mode-S/3D will show the pilot the locations of Mode-S transmitting aircraft on the RADAR screen. These will be seen well before the pilot can see them visually and gives a strategic view that can be used to determine whether they are converging or diverging from the aircraft's current track. Armed with this knowledge the pilot can be aware of their strategic presence but maintain a tactical visual scan, to look for the aircraft that is getting close but has no EC.

The following screenshot shows PilotAware RADAR plotting Mode-S/3D, ADSB and PilotAware equipped aircraft on the tablet screen.  All targets shown add to your strategic situational awareness but should be interpreted in different ways. Mode-S/3D targets are directly detected Mode-S targets that have been annotated with their latitude and longitude when in range of an ATOM GRID station(s).

In this screenshot, you will notice that the centre of some of the target aircraft shown are surrounded by a red circle. These are Mode-S/3D targets that will be shown when you are in range of at least one ATOM ground station and directly detecting a Mode-S transmission. The circle is an ambiguity circle that will grow in size based on the age of the data and the speed of the aircraft. The aircraft can theoretically be anywhere within the circle. This gives better situational awareness than if the target was to be identified without a bearing, or not at all. The RADAR vertical and horizontal filters are open wider than would normally be used. This is to demonstrate how many mode-S targets are being plotted compared to ADSB, Flarm and PilotAware. For example, the blue filled-in diamond at 1800 ft is a known PilotAware target.

Mode-C and Mode-S transmissions received directly by PilotAware units, that are not in range of an ATOM GRID station, cannot be plotted on a screen. This is because no GPS coordinates are available. Consequently, only the height separation and an approximate distance (approaching or retracting over time) can be given. The height separation will be accurate within the accuracy of the target barometer usually +/-100 ft. This and the fact that no bearing can be given should be taken into consideration when using bearingless targets. A bearingless target is shown via a banner in the top right-hand corner of the RADAR Screen.

In the screenshot below a Mode-C transmission is shown at a height separation of 378ft and it is flying level neither descending not climbing. The green background shows that it is at a distance you have considered as a first (green) warning

We trust that this document has been useful in providing information on how Electronic Conspicuity can help you to fly defensively and avoid other aircraft. EC is a secondary aid and not the only way to give yourself and others a safety advantage when Flying. Others include